I recently shared the Features of my Android Test Automation Framework and also the challenges, and, how we overcame those, to make the parallel test execution work well with Android 7.0 devices as well.

In this blog post, I will be sharing the details (including code) of the implementation. If you have not read my post on - Features of my Android Test Automation Framework - I highly recommend you read that first.

To recap - here is the tech stack that we currently have:

We currently have 5 Jenkins Nodes setup as shown below. 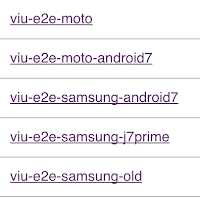 Once the Nodes are setup, we can now configure the Jenkins Jobs.

We have setup the following jobs in Jenkins for our test executions. 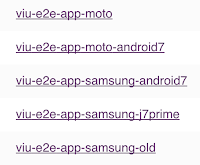 Each job is configured as a Jenkins Pipeline Project and we use the the Jenkins file available here (https://github.com/anandbagmar/cucumber-jvm-appium-infra/blob/master/2%20-%20Setup%20Jenkins%20Jobs/2.2%20Jenkinsfile) as a sample from git to configure what the job is supposed to do.

Once the Jenkins Nodes and Jenkins Jobs are configured, we now need to get the Jenkins Agents itself setup and configured to be able to service the requests from the Jenkins server.

We use the JNLP way to connect the Jenkins Slave to the Jenkins server. For this, we have a template .sh script, which we need to copy and update 2 values in it. This is needed for each new Jenkins Node that we connect.

The template .sh script can be found here (https://github.com/anandbagmar/cucumber-jvm-appium-infra/blob/master/3%20-%20Setup%20Jenkins%20Agent/3.1%20start-e2e-moto.sh).

Now, our Jenkins setup is done. But a big piece is still missing.

In order to run our tests on the Agent, we need some basic software to be installed. To do this, we created a shell script, that will help provision the machine. This is required to be done just once - but we do plan to have multiple Mac Mini host machines that will run various number of Jenkins agents - so the script will help keep same software (including version) on our machines - which means the same test execution environment.

This shell script can be found here - (https://github.com/anandbagmar/cucumber-jvm-appium-infra/blob/master/3%20-%20Setup%20Jenkins%20Agent/3.2%20JenkinsAgentMachineFirstTimeSetup.sh)

By this stage, our Jenkins Server, Jenkins Agent setup is done, including the software required to run the tests. Next thing is now at the Test Framework level. 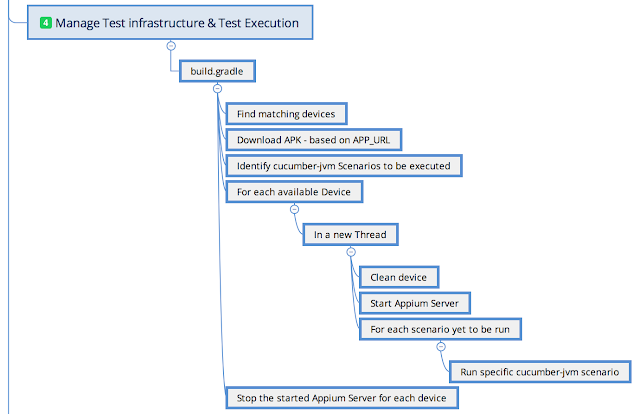 Our build tool is gradle. All infrastructure related work is handled via this build.gradle file.

Before we get into the details of the gradle file, it is important to understand what the code structure is. 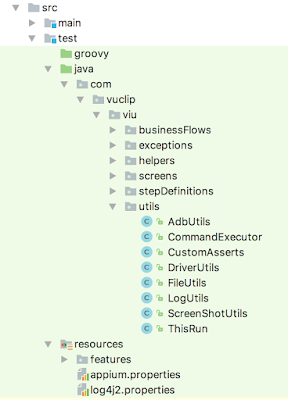 Via groovy / gradle, we managed to solve the complexity of:


The gradle file with all this configuration is available here (https://github.com/anandbagmar/cucumber-jvm-appium-infra/blob/master/4%20-%20Manage%20Test%20Infrastructure%20and%20Test%20Execution/4.2%20build.gradle).

Last, step in this process - is to manage the Android Driver. We use the Cucumber-jvm's @Before and @After hooks to set the right capabilities for instantiating the AndroidDriver, and also stopping the same after test execution is complete. 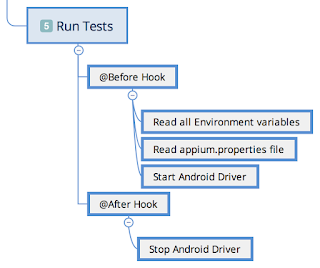 These helper files can be found here (https://github.com/anandbagmar/cucumber-jvm-appium-infra/tree/master/5%20-%20Run%20Tests).

Finding my way out of bottomless pit with Appium & Android 7.0 for parallel test runs

As mentioned in my earlier post - I designed and implemented a cucumber-jvm-Appium-based test framework to run automated tests against Android Mobile Devices.

All was good, tests were running via CI, in parallel (based on scenarios) against devices having Android v5.x and v6.x.

Then the challenges started. We got some new Motorola G4 Plus devices for our Test Lab - which has Android 7.0 installed.

First the test refused to run. Figured out that we would probably need to upgrade the appium java-client library version to v5.0.0-BETA1. By the time we figured that out, appium-java-client v5.0.0-BETA2 was out. We also needed to change the instrumentation to UiAutomator2. This was all fine. Our tests started working (after some more changes in how locators were defined and used).

However, the tests refused to run in parallel on the Motorola devices with Android 7. The app used to launch correctly, but tests used to run as expected only on 1 of the devices - causing our test job to fail miserably, and without any clue.

These same tests continued to work correctly with all other devices having Android 5.x and 6.x. Very confusing indeed, not to mention highly frustrating too!

By this time, appium-java-client v5.0.0-BETA3 was out, but refused to upgrade to that - as the difference was iOS specific. Likewise, Appium v1.6.4 BETA is now available - but not feeling to upgrade so fast - and battle the new surprises, if any.

After digging through Appium's open issues, figured out that many people have faced, and got the similar issue resolved. The solution seemed to be to upgrade the appium-uiautomator2-driver to version > v0.2.6.

So - next question, which had an easier answer - how to upgrade this uiautomator2-driver. However - after the upgrade, my issue did not get fixed. In fact, now the Android Driver was unable to get instantiated at all. I was getting the errors shown below.


Eventually, found a workaround. I had to make the following 2 changes:
Post this, my tests are now working, as expected (from the beginning), sequentially or in parallel, against all supported Android versions.

After the dust settled, my colleague - Priyank Shah and I were thinking why not many people have encountered this problem.

My thought is probably most people may be managing the Appium Server and the Android Driver from the test run, instead of from a build script. As a result, they would not have encountered the systemport related challenge as we did.

PS: Note that Appium Server is started / stopped via our build.gradle file and the AndroidDriver is instantiated (based on parameters passed via a combination of environment variables & properties file) from within each cucumber-jvm scenario (@Before hook).

Hope our learning helps others who may encounter similar issues.

How to upgrade the appium-uiautomator2-driver version for appium 1.6.3?

I need to upgrade to the newer appium-uiautomator-driver@0.2.9 (which has a fix for an issue I am seeing - https://github.com/appium/appium/issues/7527).

Any idea how I can upgrade the uiautomator2 driver (while using the same appium@1.6.3)?

As I have shared in my previous few blog posts (A new beginning - entertainment on mobile, How to enable seamless running of appium tests on developer machines?), a few months ago, I embarked on a new journey as "Director - Quality" for the Viu product at Vuclip.

Here are a few details about our Viu app:
Viu offers high quality, popular, regional video content in various different languages for consumers in various different regions - Indonesia, Malaysia, India, Middle-East, Egypt ....
The consumers on the move could be using Android devices or iOS devices to watch their favourite content - either stream it directly via their Mobile Data plan, or they could have downloaded their preferred video at home / office and watch the saved video later.
The very interesting, and, challenging bit from Testing perspective, is that the app would behave differently based on from which part of the world the user is using it. This logic is not based on Geolocation.

My objective from functional test automation is:

To achieve this - I choose to go with the following tech-stack:

I looked at various cloud-based service providers (SauceLabs, Test Object, pCloudy, AWS Device Farm, etc.) who could run our tests on real-devices in their data centers. These tests would need to be triggered automatically via Jenkins when a new build (apk) is available, or as we add more tests. However, none of these providers could satisfy my requirements (without having to compromise significantly on my objectives).

Hence, finally decided to setup my own private Test Lab for this. Oh fun!

Below is the architecture of the framework that I came up with. This is based on the architecture I posted in my earlier blog post on “Assertion & Validations in Page Object” (https://essenceoftesting.blogspot.com/2012/01/assertions-and-validations-in-page.html) 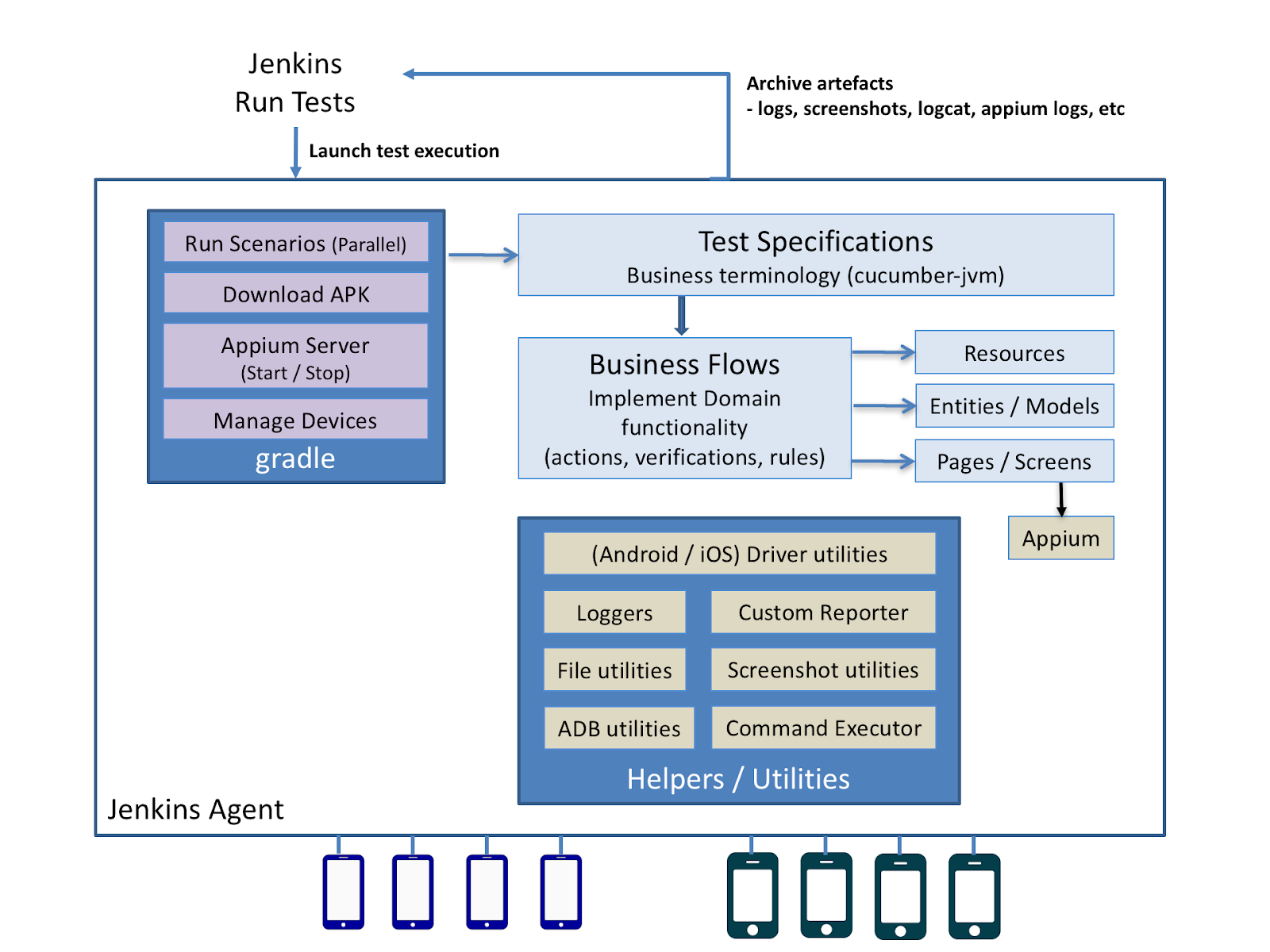